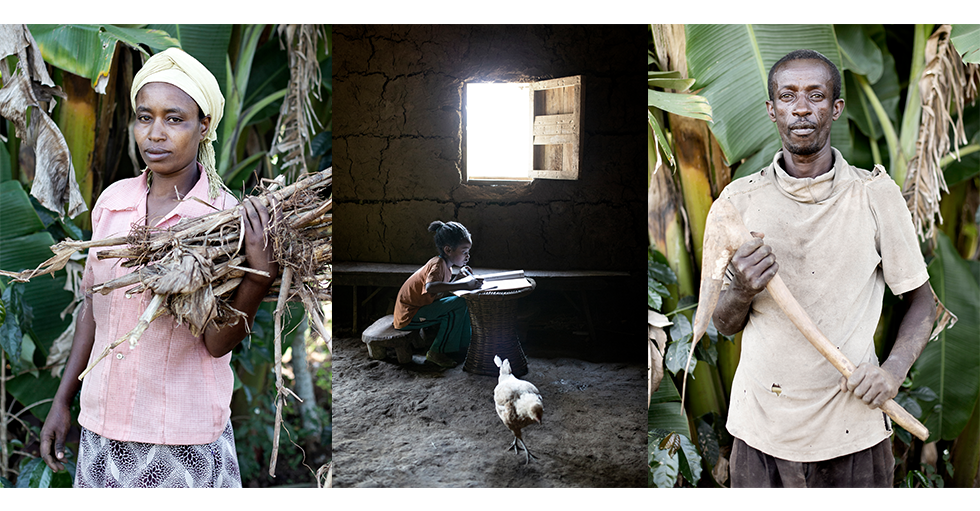 Several years ago, photographer Rosie Hallam visited a pilot of the Luminos Fund’s Second Chance program in Sidama, Ethiopia. It was a trip she never forgot. Rosie met Second Chance student, Selamaw, on that trip and spent the day with her family, taking a series of extraordinary portraits. This month, Rosie won the Royal Geographical Society’s prestigious 2021 Earth Photo competition with her portraits of Selamaw and her parents in a piece entitled, “A Right to an Education.” We spoke with Rosie about winning the award, getting to know Selamaw’s family, and visiting Second Chance classrooms in Ethiopia all those years ago.

Luminos: Congratulations on winning the 2021 Earth Photo competition! What does winning this award mean to you?

Rosie: It’s very exciting! And somewhat surprising in a way, because I felt the images I selected for the competition were quite subtle in how they might represent what Earth Photo 2021 was about.

I imagined a lot of people would think about climate change—images that people see daily of droughts and fires. But for me, it’s about the subtleties of stories. Telling individual tales about people. Amongst all the photographs I took in Ethiopia, Selamaw’s family particularly stood out for me. There was something about their dignity—I remembered them immediately and went straight to those images for the competition.

It’s a tale about a family. It could be one of millions of families around the globe. It’s quite a subtle tale of how they live their lives on a day-to-day basis.

I think education programs—lifting people up out of grinding poverty—are an amazing way of helping people, their communities, wider society, and the country as a whole.

It’s great that these photographs give people the opportunity to learn about the work that organizations like the Luminos Fund are doing. Photography is such a great way of telling those stories.

Luminos: Out of all your work, why did you choose to submit these three photos for the 2021 Earth Photo competition?

Rosie: It touched me a lot—it was just an amazing program. I don’t think any sort of charitable program has touched me as much as [Second Chance] has. Just how simple it seemed and yet how unbelievably effective it was. It literally transformed people’s lives with relatively small amounts of money.* People weren’t being given thousands of dollars, it was small seed funds. From that they were growing businesses and not just lifting themselves out of poverty, but everyone around them.

I met a lovely woman who was running a café, built from her savings group seed funding back then. Her son had completed the Second Chance program, and now all her other children were going to school because she now had the money to send them. Second Chance didn’t just impact that one child who did the catch-up program, it impacted all [the rest]. And then they’ll have children and their children will go to school. This small seed funding can impact dozens if not hundreds of people. I just thought it was amazing.

*In Ethiopia, as part of our program offering, Luminos runs savings groups for mothers of Second Chance students. Women meet weekly to save, form a business plan, and receive business and literacy training. They also receive seed funding to launch their business and are connected to local microfinance groups at the end of the school year. Eventually, mothers increase their economic stability and ability to cover the costs of future schooling when children transition to government schools.

Luminos: Where did Selamaw live and what was her life like?

Rosie: Selamaw lived in a small village with her mother, Meselech, father, Marco, and three other siblings. The school was in the center and traditional huts were spaced around it. Selamaw hadn’t been in school before because her family couldn’t afford it. She was roughly 9 or 10—the same age as my daughter at the time.

Meselech hadn’t had an education and Selamaw was her first child who was able to go to school. This was at the very beginning of the program, and already her daughter could now write her name and was learning to read. I think the mother thought it was brilliant. Meselech was really engaged in the program and fully encouraging of her daughter: she said Selamaw was working hard and would continue her education after the program.

Selamaw enjoyed being at school and learning—being able to write her name was big news. The classrooms were absolutely amazing. As you approached the school you could always hear which one was the Second Chance classroom by the level of noise. All the kids were answering and everything was very visual—lots of handmade things and the students are all wearing hats. That’s what was so lovely about it—it was really vibrant. Seeing children that were so keen to learn and that were so engaged with what was going on. That’s what I really remember from going into the classrooms: these great levels of energy.

Selamaw studied at school, but then she also did all her daily chores: sweeping out the house, picking coffee beans, going to the well to collect water like all the other children. The day I visited her family, I stayed with them all morning and we ate lunch together. To watch that meal being prepared from nothing, all from the land, was mind-blowing for me. It was a really humbling experience.

Everything they needed they had to go and get. If they wanted to eat, they went into the field at the back of the house and picked some crops. To cook the food they had to go collect the firewood to build the fire. They had to go to the well to get water. To make coffee, they would pick beans from a few coffee plants on their land, dry them out, and roast them before grinding them for coffee. Every single thing they ate and drank came from their land.

You realize how fragile people are. You look at things like environmental changes—you’d only need a flood or a drought and that’s a family who’s not eating anymore.

Luminos: Why do you think education is important?

Rosie: I think education is important in every single society. In London, where I live, some people are more advantaged than others. Some people have better opportunities to get a decent education than others. It’s the same around the globe. Education is both a basic human right and a smart investment. It is critical for development and helps lay the foundations for social wellbeing, economic growth and security, gender equality, and peace. These really are the cornerstones of life. Everybody benefits from having a better education.

You can explore more of Rosie’s work here and view all the photos in the 2021 Earth Photo competition here. The Luminos Fund’s program pilot in Ethiopia was originally funded by Legatum. The program is occasionally known as Speed School. Learn more about our work in Ethiopia here.