Accelerated Learning in Africa: The Expansion and Adaptations of Second Chance (Part 2) 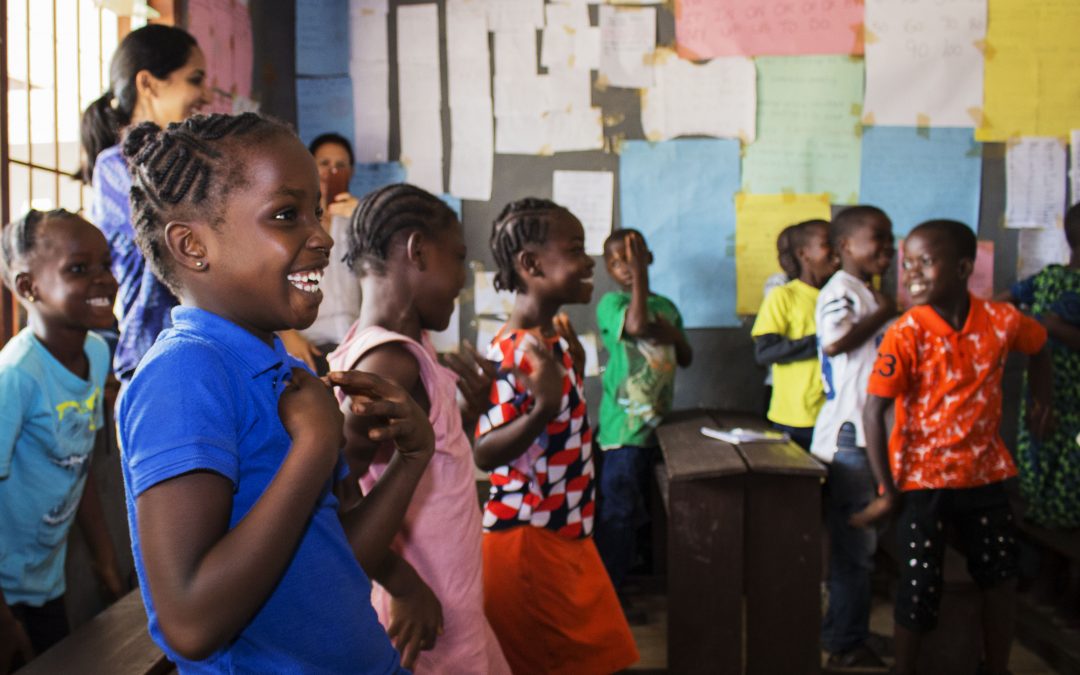 Thomas Hatch is a Professor at Teachers College, Columbia University and Co-Director of the National Center for Restructuring Education, Schools, and Teaching (NCREST). In December, he posted two articles with his reflections on Luminos’ unique approach to accelerated learning. These posts have been reproduced here with permission from International Education News.

Second Chance’s efforts to carry out such an unconventional pedagogical approach in what are usually remote areas depends on building an alternative infrastructure for learning that incorporates local materials, training for local youth, partnerships with government schools, and support for parent self-help groups. Rather than creating this infrastructure itself – and growing a larger organization to do it – the Luminos Fund’s efforts to expand Second Chance build on the expertise, resources, and relationships that local implementing partners have already established. Those partners include NGO’s that have a record of accomplishment and a presence in the communities where Second Chance seeks to work. Luminos provides training, materials, guidance and oversight for the partners, but the partners hire and train facilitators, supervisors and project coordinators.

Second Chance’s expansion to Liberia uses this local approach to test the viability of program in what Baron described as an “under-resourced” context.  Khosla was more emphatic:  “It’s exactly the same program, but, oh my god, the challenges are so different.”  Those challenges include an out of school rate in Liberia of over 50% for children of primary school age (compared to about 35% in Ethiopia); extreme poverty and a lack of basic necessities; an economy growing at about half the rate of Ethiopia’s; and public spending on education also at about half the rate of Ethiopia’s.

All of these factors contribute to much higher costs.  With so little money for education, textbooks are scarce – roughly 1 textbook for every 28 students, according to Khosla. That means textbooks have to be imported and delivered to the schools, and the inadequate roads lead to high transportation costs that compound the problem. As a result, initial costs to set up a Second Chance classroom in Liberia run about $10,000 per classroom, where it only cost about about $6000 in Ethiopia.  Although Luminos’ aims for a 300$ per pupil cost once the program reaches scale, the per student costs in Ethiopia work out to only about $150.

Early on in the work in Liberia, the staff also discovered that the impoverished conditions meant that many of the students were going through an entire day without food.  As Khosla explained, “In Ethiopia they have a 1 ½ hour lunch break where they go home everyday to eat lunch and then go back. We thought the same model would work in Liberia, but there’s no food. “Kids were coming to school so hungry,” Baron added, “it was a fool’s errand not to address that need, but that means we are delivering rice and beans to mothers who are cooking food.”  Baron pointed out that this “small” change in the schedule in Liberia introduces a whole new series of problems to be addressed – where to get the food, how to import it, how to prepare it – that requires establishing a whole new supply chain, with new job responsibilities and added costs. “And there are hundreds of weak points in the chain,” lamented Baron. For example, there are periods for traditional religious practices where it is unsafe for children to be out collecting the wood needed to fuel the fires for cooking.  With no firewood, students can end up going several days without food, unless the staff at Second Chance make the local adjustments that enable he work inside the classroom to take place.

The difficult conditions and hardships in Liberia affect the Second Chance facilitators as well.  For example, although initial assessment results in Liberia indicated that students’ literacy learning was far behind the students in Ethiopia,  further analysis showed that the facilitators also had much lower scores on related literacy assessments than their peers in Ethiopia.  Similarly, Khosla pointed out that the content of the training for the facilitators is quite basic “because the focus is on the early grades.  But we are finding in Liberia that it’s not basic. There are still some issues that facilitators have with teaching parts of speech for example, so we are figuring out how we can fill some of those gaps in content knowledge.” These results are not surprising, however, given that the local youth the program relies on for facilitation have had to live through a series of wars and an Ebola crisis that interrupted their own schooling and development.

The transportation problems also complicate the training efforts; discouraging facilitators from getting together to share information, reflect on what they are doing, and address common challenges. Khosla explained, “If you have to deviate from the main road, then you are in the bush, and then you are in the bush for at least 10 miles to reach one school. So for us to tell the facilitators to meet up often is logistically impossible.” The Second Chance leaders solved this problem and the problem of distributing salaries to a widely dispersed staff of facilitators (who need to be paid once a month, in person, in cash, since they don’t have bank accounts) with one adjustment:  they pay the facilitators at the end of the day, after they have attended their monthly learning community meetings. “It’s a good way to ensure they come to the meetings,” Khosla noted.

The initial work in Liberia revealed challenges for Luminos’ strategy of relying on local partners as well. In Ethiopia, Luminos’ has a team of five working with fourteen implementing partners managing a program of 20,000 children. In Liberia, the relatively small number of established NGO’s who have the capacity to serve as partners means more intense engagement for Luminos:  a staff of three works with four implementing partners for a program (so far) of only 2000 children.  The early stage of the work in Liberia also means that, as Khosla put it, neither the local partners nor the facilitators they have hired “know what a Second Chance classroom looks like, and what to aspire to.”  Consequently, in the 2018-19 academic year, Luminos created 4 Second Chance programs to serve as “centres of excellence” with model classrooms so that facilitators, partners, and even government officials can come and see the program in operation. Given the need for all these adjustments, the initial rate of expansion in Liberia may well be slower than it has been in Ethiopia.

Despite these challenges, Luminos chose to work in Liberia because of the possibilities and assets that it found there.  With Liberia’s small size, Baron, Khosla and their colleagues have good relationships with a government working to re-imagine education and other sectors of the society.  That may create opportunities to influence government policies, for example, enabling facilitators to get a license to teach in government primary schools after they go through the Second Chance training.  “That would put facilitators in a really good spot to get placed in a government school,” Khosla said.  It would also create a powerful incentive for local youth to get Second Chance training and provide an entry point into government classrooms for Second Chance’s pedagogical approach. These kinds of possibilities, along with the fact that English is the official language, means that, if Second Chance is successful in Liberia, it may have more of a chance of being picked up by the government and scaled throughout the country than in Ethiopia.

The latest opportunities for expansion have taken Luminos to Lebanon, where the crisis in Syria has produced the largest recent wave of refugees and out-of-school children. In Lebanon, the conditions for refugees are extremely difficult, but the Lebanese government has its own well-established programs for accelerated learning.  However, English and French are the languages of instruction in the government schools and accelerated learning programs, but most of the refugees speak Arabic.  To respond to this situation, Luminos has shifted its focus to use its active learning pedagogy to help refugees make the transition into the Lebanese accelerated learning programs and then into the government schools.  .

Establishing an alternative infrastructure for learning – or, where possible, grafting it onto and into the local educational system – reflects a clear theory of action: this “second chance” for children to catch up to their peers and transition into primary school at grade 4 constitutes one of the most powerful and cost effective ways to substantially increase educational access. In continuing to pursue this theory of action, Second Chance’s expansion depends on far more than replicating a program “with fidelity.”

For one thing, Luminos has to pay attention to the larger context in which their work on education in the developing world takes place. That means recognizing the fact that priorities have shifted from a focus on increasing access by 2015 (in the Millenium Development Goals) to ensuring quality in education by 2030 (in the Sustainable Development Goals). As a consequence, Luminos needs to talk about the program differently so that those funders who are now working on quality can see the value of the Second Chance approach.

Luminos also has to be responsive to the local contexts in which they work. As Khosla acknowledged “Second Chance cannot just be plopped down in any regulatory environment.” Second Chance needs to find the right “fit” in contexts that provide the model with what the psychologist Lev Vygotsky called a “zone of proximal development”: places with both substantial need for accelerated learning and enough support and resources to take advantage of Second Chance’s alternative infrastructure for learning.

When it finds the right fit in places like Liberia and Lebanon, Luminos then works to stay true to its theory of action. On the one hand, that means remaining focused on key issues and opportunities for accelerated learning that gave rise to the model in the first place:

On the other hand, that means looking for the specific contextual differences and pursuing the problem-finding and problem-solving in each context that makes it possible to adapt. “Pay attention to “all the really small ‘last mile’ things” advises Baron, “things that may not seem so groundbreaking but nonetheless create a foundation for success and expansion. If you are more modest about what individual change you can make, you can have a bigger impact.”