Impact and Insight: My Visit to Luminos Classrooms in Liberia 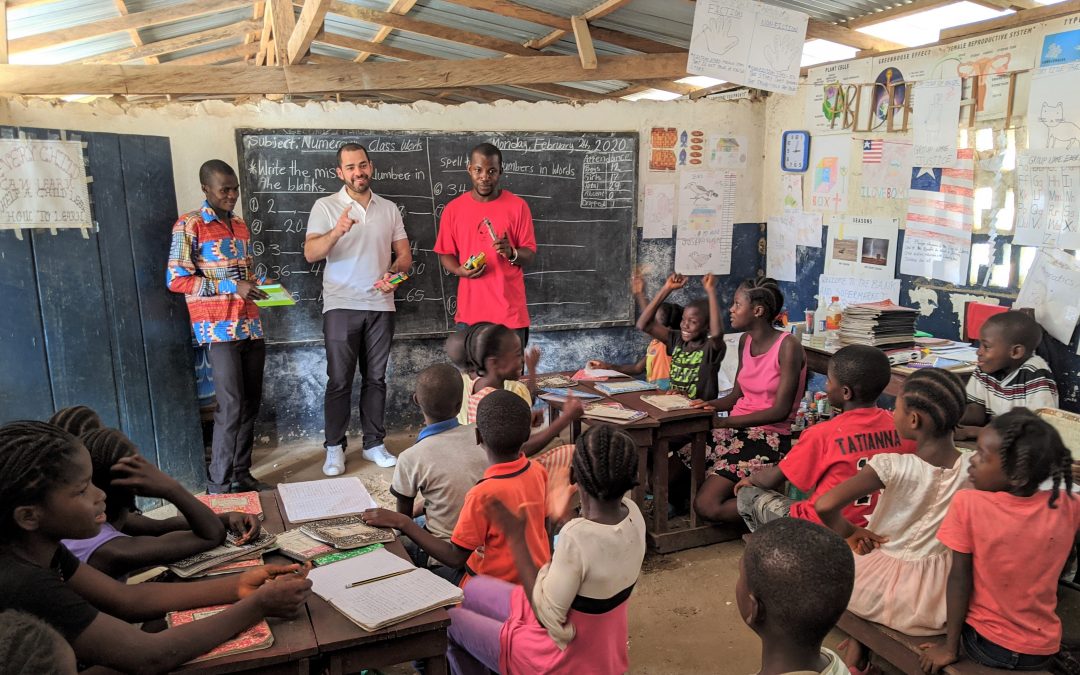 The Luminos Fund is delighted to feature this guest blog by Michel Al-Moumen, an Investment Analyst at Legatum.

In February, before the pandemic closed our borders and forced us into new ways of living, working, and innovating, I headed from my home in Dubai to Monrovia with six colleagues of mine. We were going to meet with a team of people who are lowering the barriers to education and the children who were being given a second chance because of it.

Each year, a small group from Legatum goes out into the frontline to spend time with one of the many communities we work alongside. Doing so helps us understand more about the ways in which we can work best with those on the ground.

Although my role within Legatum focuses on the investment area of our business (I’m one of three investment analysts), as a whole the company is positioned to provide people with the opportunities required to live a more prosperous life.

The community leaders we went to meet with work for the Luminos Fund, which is one of three private philanthropic funds that Legatum founded. Luminos launched in 2016, evolving out of six years of test programs in West Africa and Ethiopia.

While in Liberia (which, by the way, is such a beautiful and friendly place, with fantastic food!), I came to fully understand three things:

The most powerful thing about Luminos’ Second Chance program was the enthusiasm and sheer determination of the kids in the classroom. The classes (which use accelerated learning techniques) were energetic, joyful, and expressive. What I appreciated the most was hearing the kids sing a song that went like this: “Everywhere we go, people want to know, who we are, and we tell them, Second Chance is our name!” I realized that this program was more than just an education for these children, it was their identity. To see the children building a community together, with Second Chance as the common thread, was a beautiful thing to witness. Having a strong identity is a powerful motivational tool and key drivers of hope and self-belief.

2. We are all connected

At Legatum, we believe that we are all connected – if you suffer, I suffer. But that doesn’t mean we simply swoop in and try to solve things. Not at all. Instead, what we do is provide the capital, support, and ideas to help local community leaders, those who know and understand how to best serve their communities, drive change forward. When I met Abba and Alphanso, who run the program in Liberia, I saw first-hand how powerful this notion is. They were passionate, committed, and inspiring, and displayed a genuine desire to help get children back into the public-school system. It was their community and they were ready to devote their lives to improving the opportunities of those around them.

On the second day, we met with the Honorable Gbovadeh Gbilia (known as “GG”) who heads Liberia’s Education Delivery Unit at the Ministry of Education and is Vice-Chair of UNESCO’s Education Commission. GG is the kind of guy that really inspires people – he has a radiant smile, is extremely articulate, and shows a genuine dedication and belief about education as a right of passage for all people. One thing in particular that really stuck with me was how GG characterized Liberia as a nation of “survivors:” Liberians were people who had survived years of a bloody civil war in the 1990s and early 2000s and the fear and economic damage caused by the Ebola crisis in 2014. This really struck me, but it also filled me with hope for the people of Liberia. Now, more than ever, Liberians have the chance to create the lives they want to live.

The Second Chance program is a well-oiled machine. There is a strong system in place that engages the community, implements an effective curriculum to achieve functional literacy in a very short period of time (they use phonics and unique ways to identify words), and an efficient reporting structure between facilitators (teachers), program coordinators, and the Luminos team.

Overall, the experience of being with our partners in Liberia was hugely impactful and insightful. Despite the economic circumstances that the Second Chance children and their families are in, the children had an amazing energy about them. You could feel that they recognized the opportunity was in their hands, and they had hope and excitement to make the most of it.