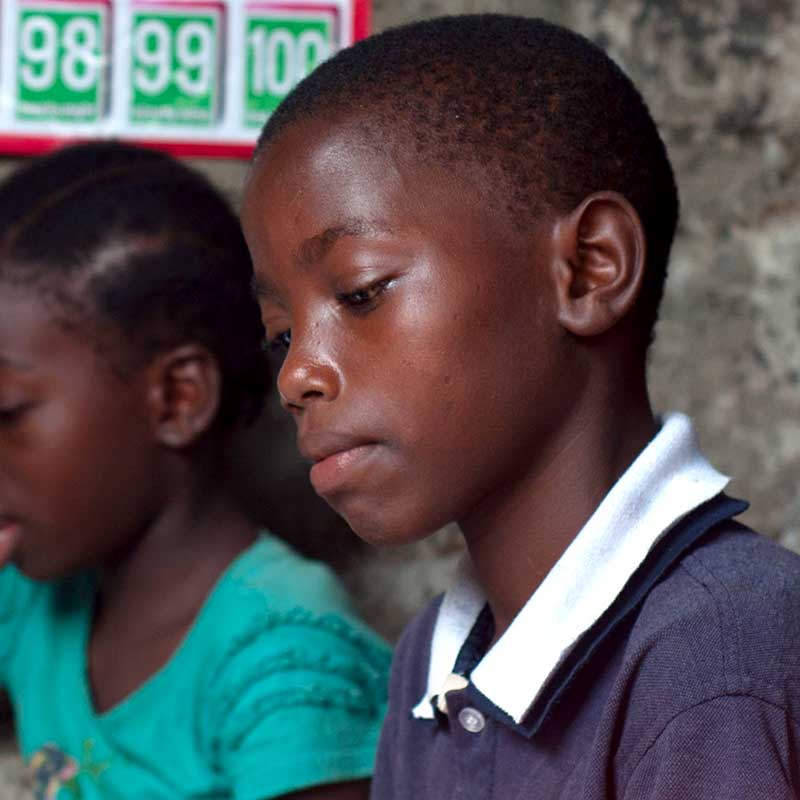 Two years ago, Nathan relocated from Nimba County to a suburb of Monrovia to stay with his grandmother. Many rural Liberians send their children to relatives living in Monrovia to allow them to have better access to opportunities.

However, for the last four years, Nathan has been unable to continue his schooling. His illiterate grandmother, who had promised Nathan’s parents that she would enroll him in a school, does not generate enough money for school fees. She and Nathan survive by selling herbs, but the funds from those sales are only enough to feed them. Prior to joining Second Chance, he had only completed a Pre-K program.

“I used to feel bad because my friends were going to school, but I was not in school,” he says. Since entering the Luminos program, Nathan says he has regained his happiness. He can recite the 26 letters of the alphabet, he knows his numbers, and he can now spell three-letter-words. He now sees his dream of becoming a medical doctor as much more attainable. 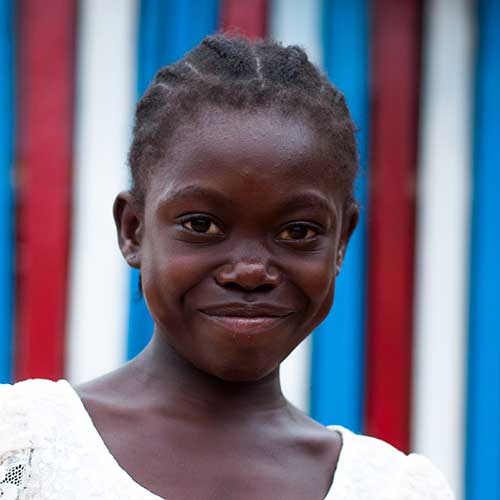 Mechan used to be among the 62% of primary-school-age children in Liberia not attending school. Two years ago, Mechan had to drop out of community school because her parents could no longer afford to pay her school fees. Even though primary education is nominally free in Liberia, because of the limited funding to the education system, public schools still charge families sizeable registration fees.

Mechan’s experience of an often-interrupted education has inspired her to become a classroom teacher. “I like being a teacher because I want to teach other children how to read – how to spell and write their names,” she says.

Mechan says she appreciates the Luminos program better than her previous school because she enjoys the enthusiastic way her facilitator presents the lessons to the students. Just a few months into the program, Mechan says she now knows how to spell her name and identify letter sounds, skills she never had before. 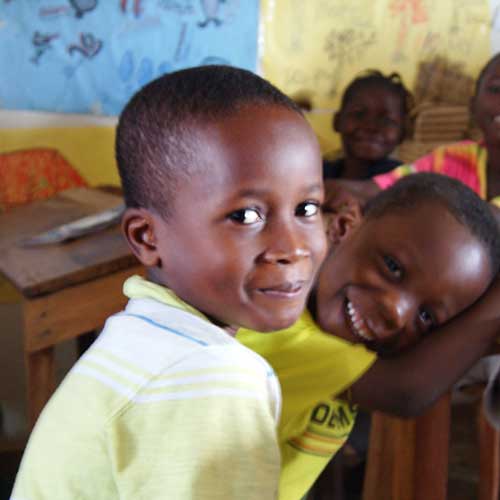 Chris’s family lives in Bomi County, Liberia where they face such extreme poverty that they are unable to enroll him in school. “The only thing we can try to do now is find food for the house… there is no way to send him to school,” his parents say.

“Every year, we say to him that we will try next year.” This year was finally “next year.” In January 2017, Chris enrolled in the Luminos accelerated learning program and after only five months, he learned how to read and write. Victoria, Chris’s mother, says he explains everything he learns in school to her when he comes home, exclaiming “I love to read and write!” 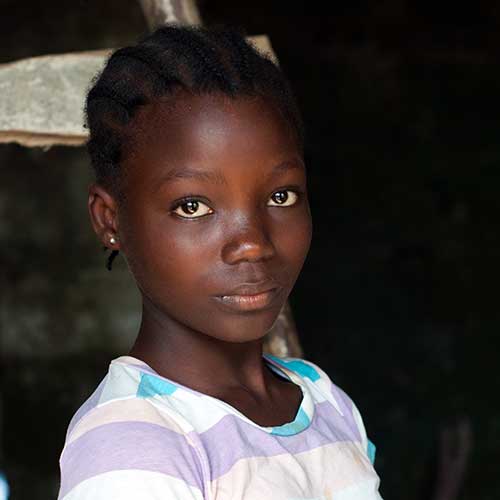 Prior to joining the Second Chance program, Katumu had never had any formal schooling. In fact, her mother didn’t have enough money to send her or her two siblings to school. Her father lives in Grand Cape Mount County, about 100 km away, farming rice and cassava. He frequently sends the meager proceeds from the farm sales to Katumu’s mother. Even now, Katumu is the only one of her siblings in any educational program.

That’s why, since joining the Luminos program a few months ago, Katumu cherishes the opportunity to learn. “Where I live is far, but I walk to come to school every day because I like my teacher.” she says. Katumu’s face lightens up as she talks about the different subjects she’s learning. She recently learned how to spell her name. When she grows up, Katumu says she wants to become a medical doctor to cater to families who cannot afford health care. 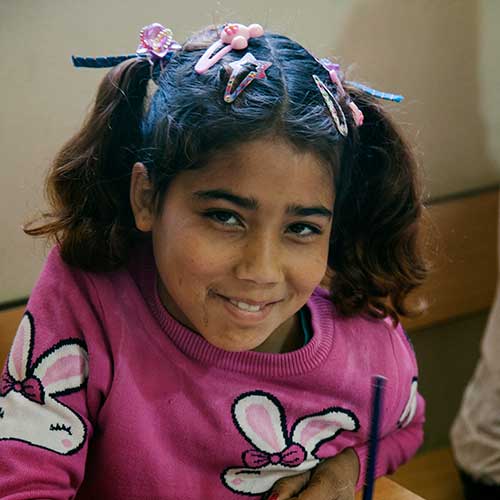 Yasmin moved to Lebanon with her family when she was just six years old. With the ceaseless war in Syria placing a heavy financial strain on their family, Yasmin’s parents made the decision to leave their home in East Idlib in search of a new start. Now ten years old, Yasmin attends the Luminos Basic Literacy and Numeracy (BLN) classes along with her two older sisters.

“I’m happy here,” Yasmin says. “I have never been to school before. This is my first time. I never miss a day. I’m learning so many things! I love to learn! Ms. Mirna is teaching us the beginning, middle, and end of a story; main and secondary characters; time and plot. I’m also learning about PSS, how to brush my teeth, the food pyramid and about violence. Additionally, I’m learning English and Arabic. English is my favorite subject; I like to write in it. I know the letters in English. Actually, I learned them from before on TV, on the educational channel. I used to practice and write them as they appear on TV. I also know many other things in English, you could ask me about my hobby, how many sisters I have, everything else, and I could answer you right away!” 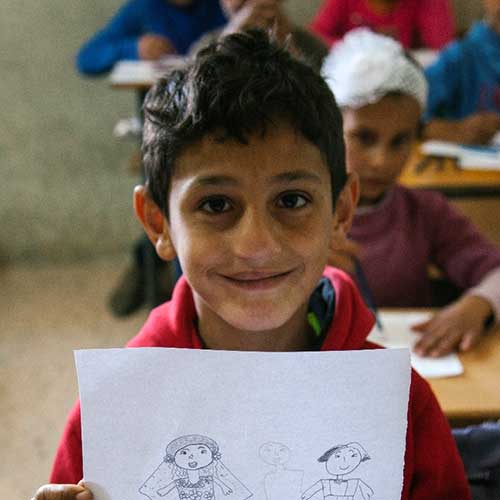 “I remember how at the checkpoints, they threw all our stuff on the ground to check whether we had any weapons, and of course, we were not armed. I left Syria with my family: my mother, father and five other siblings. We live in a tent, among another 28-30 tents in the settlement we stay in. We moved here first. When the situation became more severe, my grandparents followed, and then my uncle. We all ran away and arrived safely without any harm. We want to go back but every time we decide, something happens.”

When he first arrived in Lebanon, Ali began to learn English from his neighbor. Now he’s enrolled in a Luminos Back-to-School class. “The teacher is my favorite, Ms. Safiya. I come to school every day, so I can learn.” Ali likes to draw dresses and wants to become a fashion designer when he grows up. He recently made his first dress and sold it to another girl from the camp for Eid. 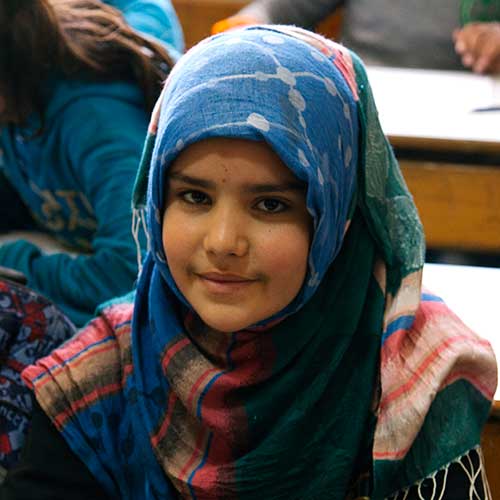 Aryam fled Syria in 2017 along with her mother, older brother, and younger sister. Her mother and brother found work at a diaper manufacturer. Once their work is stable and her family has settled in, Aryam intends to enroll in the local public school. To keep up with her studies, Aryam attends Luminos Basic Literacy and Numeracy (BLN) classes, studying English and French to prepare for the Lebanese curriculum (the Syrian curriculum was taught exclusively in Arabic). “I am learning the month, days, sounds, letters. It is the first time I learn them here. We did not learn a foreign language in Syria. I am learning how to write a letter. I wrote one to my uncle reminiscing how we used to gather on the Eid…I do not know if we are going back to Syria anytime soon.” 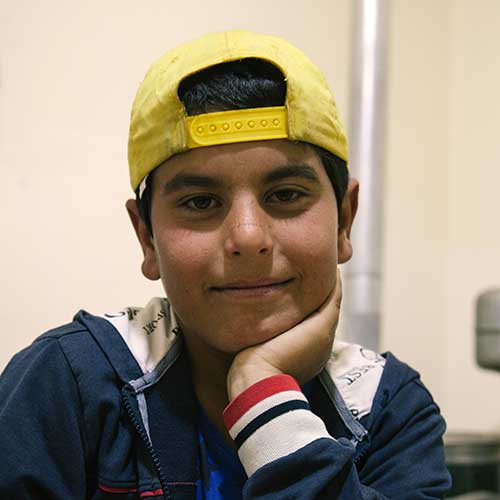 “We had to get clearance from…I don’t know who exactly…before leaving. There was a man who hit my father and wanted to take our bike away, but then my father showed him that my grandmother could not walk so he had to take her on the bike.” Ali is the eldest of his four siblings and does not remember much about his hometown. He remembers the missiles, though, and how his father carried him when they escaped Syria right after the war broke out.

Ali currently attends the Luminos Homework Support program while enrolled in the government’s accelerated learning program. The Luminos class provides academic support to ensure Ali and his peers remain in school and on track to join regular classes. His favorite subject is English, though he enjoys playing math games and working with Luminos teachers on his lessons. Ali would like to become an agricultural engineer when he is older, like his friend’s father. He wants to make it easier to plant potatoes.