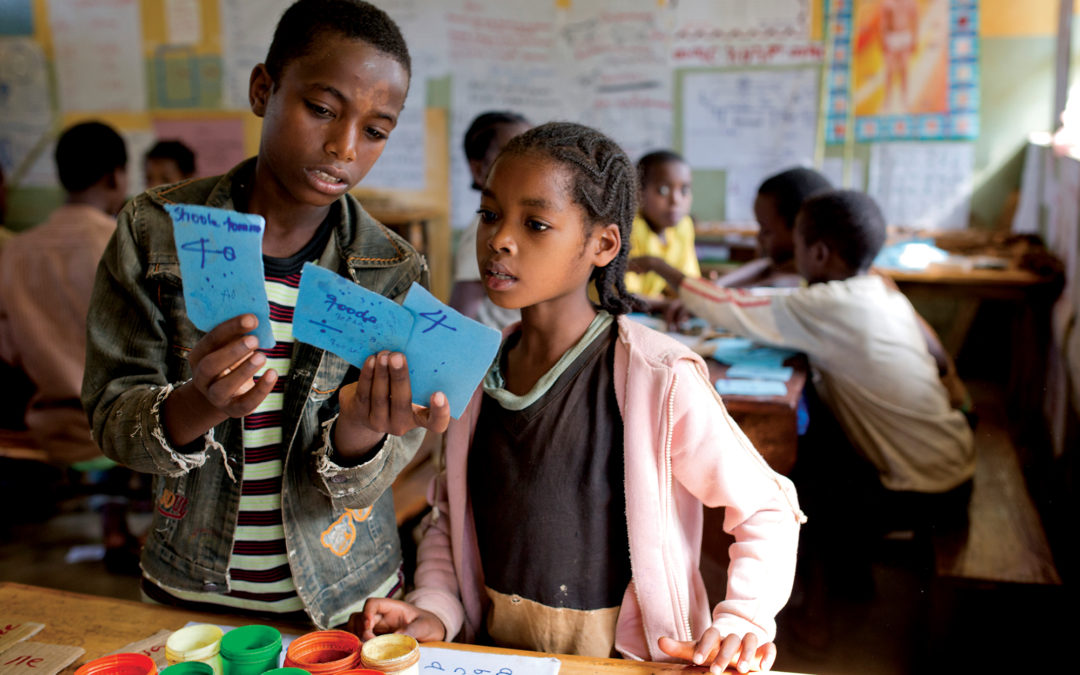 Luminos students in class, prior to COVID-19

The Program’s Comprehensive Model Has Helped Over 100,000 Children Receive a Second Chance at an Education

November 13, 2017 — The Speed School program was recognized by two organizations for the innovative way in which it provides children with a second chance at formal education. Speed School was one of the six winners of the 2017 World Innovation Summit for Education (WISE) Awards, which recognizes creative approaches to crucial education challenges. Speed School was also selected as a Global 100 winner by HundrED, an organization that seeks and shares inspiring innovations in K12 education worldwide.

The Speed School accelerated learning model delivers the first three years of a national curriculum in just 10 months to out-of-school children aged 9 to 14. With classrooms limited to 25 students, children learn through child-centered, activity-based pedagogy. The learning and skills fostered through Speed School prepares children to join government schools at the 4th-grade level. The program also works with mothers to address the root causes that prevent children from completing their schooling, such as poverty.

Speed School is an initiative of the Luminos Fund, a private donor philanthropic fund dedicated to ensuring children denied the chance to learn by conflict, poverty, or discrimination get access to quality education. The Luminos Fund engages Geneva Global to design and run Speed Schools in various countries.

“We really take second chances for granted,” said Caitlin Baron, Luminos Fund CEO. “In the developing world, people don’t have that luxury. The power of the Speed Schools’ accelerated learning program is that it provides that second chance.”

In Ethiopia, more than 120,000 children have been enrolled in over 5,000 Speed School classrooms since 2011. Over 95 percent of those children transitioned into government schools of whom 83 percent are still pursuing their formal studies.

The University of Sussex—which has been independently evaluating the program since 2011—found that after just one year of intensive study, Speed School graduates generally score above their peers who have studied for three years in their local public schools.

This finding, along with the program’s impact and scalability, was among the successes highlighted by HundrED, which noted that “the innovative pedagogical approach of Speed Schools supports children to make rapid progress and enables them not just catch up with their government school peers but actually overtake them when they return to mainstream education.”

Based on these proven results, government officials at all levels have been exploring how to replicate Speed School’s pedagogy and results within the formal education system.

“The Speed School model proves that with modest resources, kids in the most marginalized settings can receive an education that gives them solid prospects for a fulfilling future,” said Dr. Joshua Muskin, Geneva Global’s Senior Director of Programs and Education Team Leader.

The Speed School program was inspired from a collaboration between Strømme Foundation, Legatum Foundation, and Geneva Global that ran in Mali, Niger, and Burkina Faso from 2007-2009.

About the Luminos Fund

The Luminos Fund is dedicated to creating education innovations to unlock the light within every child. Around the world, there are 250 million children who never manage to learn how to read and write — 120 million of them don’t even get the chance to try as they are denied the opportunity to go to school. Beginning in the Sahel in Africa, through the refugee crises in the Middle East, and into South Asia, we work to ensure children denied the chance to learn by poverty, conflict, or discrimination get access to the quality education they deserve.

By developing and scaling innovative approaches to learning for the most vulnerable children, we’re able to work at the margins of the education system, in a space where we can create real change. As we scale pioneering, new approaches to bring quality education to children in the greatest need, we work together with local governments to drive systems-level change.

Geneva Global is a philanthropic consulting company that fuses art and science to deliver performance philanthropy for its clients. The company provides a full range of advice and services to help individuals, foundations, corporations, and nonprofits in their philanthropy and social change initiatives. On behalf of its clients, Geneva Global’s work has directly benefited more than 100 million people through 2,000 projects in over 100 countries, and influenced over $1 billion in giving. Geneva Global runs Speed School programs for a number of clients, including the Luminos Fund.