The Fight for Education Equality in Liberia: Living Up to My Father’s Example 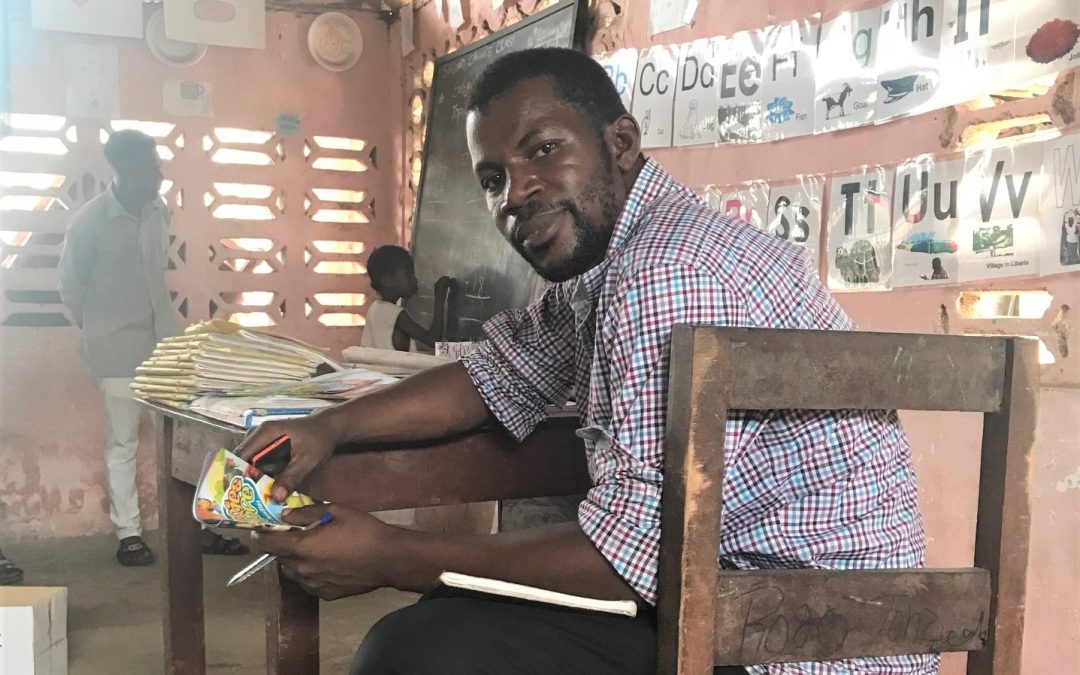 Our people are what make the difference at the Luminos Fund. This post is a part of an occasional series profiling team members and what drives their passion for our work. Here, Abba Karnga Jr., Program Manager, Liberia, reflects on his own educational journey and the importance of education in post-war, post-Ebola Liberia. 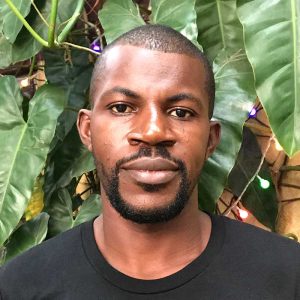 To tell my story, I must start with my father.

My father grew up in the deep jungle in Grand Bassa County, Liberia. At eighteen, he left home. He’d never been to school. He walked from the jungle to Buchanan City, about 100 km, where he realized there were no schools for him to attend. Education beyond Grade 6 was forbidden for Indigenous Liberians.

With the support of American missionaries, my father managed to graduate high school and pursue a master’s degree in the United States. Later earning two doctorate degrees, he devoted his life to expanding educational opportunity for Liberians. Above all, he made sure that education was the most important thing for my eleven siblings and me growing up in Liberia.

For instance, growing up in my family, I remember that if you didn’t go to school for any reason, you wouldn’t eat that day. If you were sick, you’d go to the clinic and then straight back to school. Gifts from my parents were always something practical like a notebook or a backpack that we could use in school.  My father was strict, but it is because of him that I developed a passion for learning that I’ve carried through ups and downs.

In 1991, during the First Liberian Civil War, my family fled to Cote d’Ivoire. We lived in a refugee community with other Liberians who had also fled (it is estimated that half of all Liberians were displaced by that war). From age 11 to 16, I attended a school for refugees. This school was different than schools I had attended in Liberia, and better. I gained a strong foundation in reading comprehension and communication skills: I learned how to learn.

When we returned to Liberia, it was still the war period. I was entering ninth grade and attended a private high school where most of the students were 5-10 years older than me. Most students had dropped out during the war and missed five years of school. There were 85 students in my 12th grade classroom. I learned very little in that school, and most of what I did learn was self-taught. 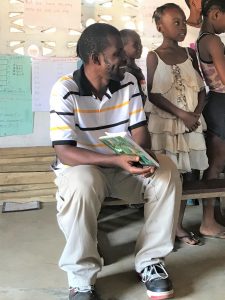 Abba smiles while observing a lesson.

Teachers at that high school were mostly people from the community who were decent at math or English, but they weren’t qualified teachers and they didn’t put students first. The Liberian government wasn’t paying teachers regularly so bribery in schools was common: teachers often required students to pay for passing grades. Exams might be intentionally difficult or cover content that hadn’t been taught. Teachers took advantage of students in many ways, like making students do chores at the teacher’s house in exchange for passing grades. It is still like this for a lot of children in this country today.

In 12th grade, I remember refusing to pay my teachers for grades. I went to my principal with my report card and said, “These aren’t my real grades.” It was because of my principal that I graduated high school, as my marks (as given by the teachers) weren’t high enough to make me eligible to graduate.

After high school, I applied to different university programs, including in the U.S., and finally enrolled at Cuttington University in Liberia to study education. In my second year, war broke out and Cuttington closed for nearly a year. I returned to Grand Bassa County where my father grew up, I grew up, and my family still lives today, as it was war-free. Soon, however, rebels entered and I found myself in the middle of a war zone. That period was one of the worst experiences of my life: living in constant fear, not having enough food, night raids, and seeing 12-year-olds working as rebel soldiers.

I graduated finally from Cuttington in 2007 and got a job as a school principal. This was a good job until 2014 when the Ebola epidemic broke out and all schools closed for seven months. During Ebola, I worked as part of the emergency response as Director of the Stop the Spread of Ebola Campaign, educating people about the disease and how to respond, identifying cases, and distributing supplies.

When schools reopened, many families did not have the money to send their children back to school, which contributed to the out-of-school problem we see today in Liberia.

Around that time, I applied for a job overseeing the Liberia country program of an organization that provided accelerated learning to out-of-school children and helped empower communities. Of course, this was the Luminos Fund and I’ve been on the team ever since.

In the Luminos Second Chance program, students arrive unable to read even though most are 10 years old. Ten months later, they are reading over 40 words per minute on average. We train local community members as teachers (we call them “facilitators”) and coach them in appropriate pedagogies and putting children first. I spend a lot of time driving to our different classrooms to check in with facilitators and serve as a mentor. I meet with other local organizations and secure support from the Ministry of Education to use vacant classrooms and help our graduates transition. We also host monthly sessions for parents and communities to get involved, get excited about their children’s potential, and commit to continue these boys’ and girls’ schooling. Teaching and education is like a sport – it works best with proactive coaching.

As I reflect on my life’s journey so far, I sometimes consider what my life would be like if I hadn’t gone to school. Like many Liberians, I would lack the skills, knowledge, and mindset necessary to earn a living and provide for my family. With a national literacy rate of just 48% in Liberia (34% for women), chances are that I would lack the ability to read a single sentence. No country in the world can make progress on development goals if most of its population is illiterate. This is why our focus on foundational literacy and numeracy at the Luminos Fund is so critical.

To this day, with much gratitude to my father, I believe nothing is more important than education. You need human capacity to build a country and you need education to develop human capacity.

The Luminos Fund has an important role to play ensuring that all children in Liberia and beyond have the chance to go to school and learn. I’m proud to be part of the Luminos Fund’s story helping unlock the light in thousands of children through education – and for Luminos to be part of my story, too. 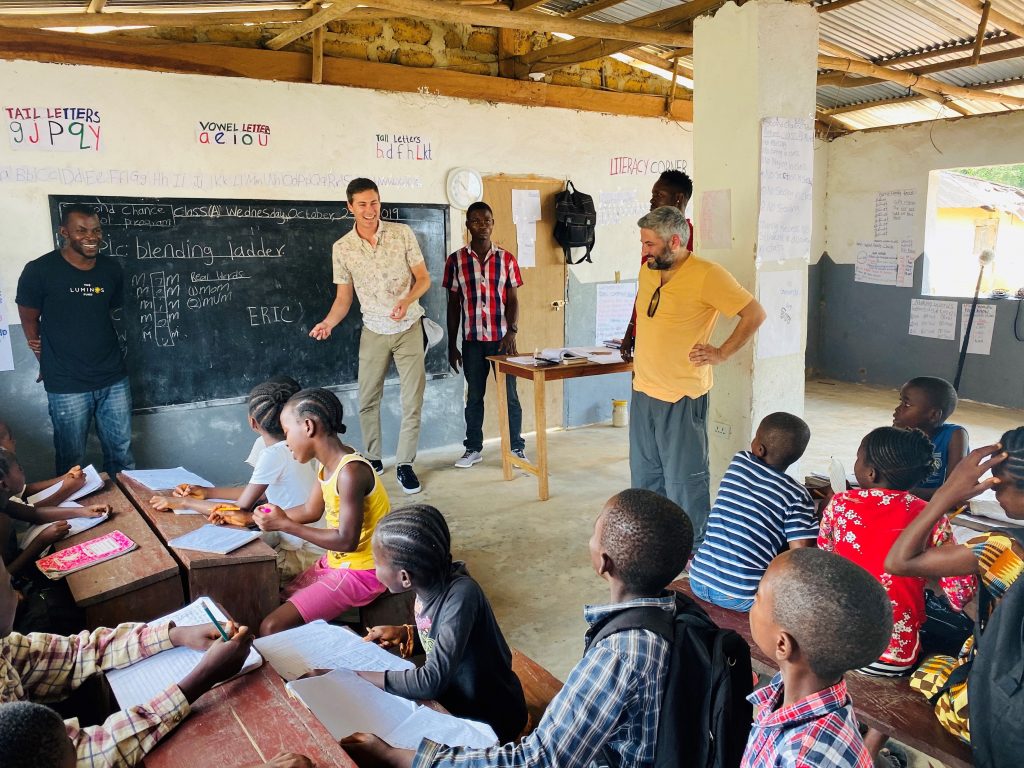 Abba, left, guides a classroom visit in Bomi County with friends of the Luminos Fund in October 2019